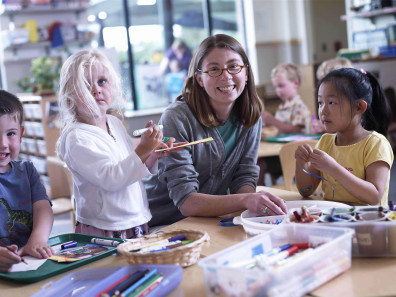 “Rock and Jane were committed to advancing education opportunities for young people so they can be successful in school, in their careers and in life,” said WSU Interim President Daniel Bernardo. “Their transformative investment in and care for the futures of WSU students – and in the education of our state’s youth – is both humbling and inspiring.”

Beginning in 2016, the R.H. and Jane Logan Scholarships will be awarded annually to WSU undergraduate and graduate students who plan to pursue careers in teaching, have a 3.0 or higher grade point average and demonstrate financial need. The awards are renewable for “Logan Scholars” as long as they continue to qualify according to the criteria.

“The creation of this scholarship is a game changer,” said Bernardo. “WSU will be able to create remarkable opportunities for our students to pursue careers as educators. The ripple effect of this generous commitment will in turn benefit the next generations of students who will be taught, mentored and inspired by Logan Scholars.”

Born in 1911 in Illinois and raised in Wapato, Wash., Rock Logan graduated in 1933 from then Washington State College with a degree in engineering and architecture. Following service in the Navy, he moved to the San Francisco Bay area in 1947 to begin a 50-year partnership that ultimately became Braddock and Logan, builders and developers throughout California.

An avid football fan, Logan was a founding partner in the Oakland Raiders NFL franchise and was also a supporter of the San Francisco 49ers.

Born in September 1933 in Selma, Ala., Jane Logan attended Auburn University. She met her husband, Rock, while sailing. The couple married in 1974.

Rock and Jane were active and generous in their community. They established the Foundation for Cardiac Research at UC San Francisco; their other philanthropic interests and associations included Meals on Wheels for Alameda County, Holy Names College, Alta Bates Medical Center, Oakland’s Providence Hospital Foundation and the Art Council of California.

In addition to being a longtime member of the WSU Alumni Association, Rock also supported the Oakland and San Francisco symphony orchestras, International Host Committee of California and was a member of the Western Society of Watercolorists, Richmond Yacht Club, I00 Club, Family in San Francisco, Claremont Country Club, World Affairs Council and Commonwealth Club of California.

An Adopted Cougar at WSU, Jane served on the WSU Foundation’s Board of Governors and Board of Trustees and on the Foundation’s Northern California Leadership Advisory Council. She was active with the Oakland Children’s Hospital, the East Bay Community Foundation, the American Symphony Orchestra League and the San Antonio Youth Project. She was a member of the Bellevue Club, the Claremont Country Club and the Lakeview Club.

In addition to receiving the WSU Foundation’s Outstanding Volunteer Service Award in 2005, Jane received numerous awards for events and fundraising from the Oakland Symphony; the American Cancer League, Northern California; National Philanthropy Day and the Salvation Army. In 2008, she was conferred an Honorary Doctor of Humane Letters by Holy Names College.
Rock Logan died in 1999 at the age of 87. Jane passed away in 2013 at the age of 79.

Through their estate, the Logans also created endowed scholarship funds at Holy Names College, the University of Oregon and Heritage University in Washington state.