Tom and Linda graduated from Washington State University in 1969 and 1971, respectively. A few years later, they started supporting the university financially. In 43 years, they’ve touched 17 different units and colleges, with athletics as a major beneficiary. The Nihouls’ largest donations have been to the Carson College of Business, including the establishment of two major funds: the Tom and Linda Nihoul Faculty Fellowship and the Thomas and Linda Nihoul Leadership Fund in Business and Honors. They are Crimson Benefactors of WSU.

The Nihouls’ giving spirit far exceeds financial donations as they share the twin gifts of their time and expertise. Linda is a selfless volunteer for the WSU Foundation serving on the Board of Governors and several committees, while Tom is involved in advisory boards for the Carson College of Business. They are actively engaged in their Greek community as volunteers serving their fraternity and sorority housing corporations. Tom is Delta Chi and Linda is Alpha Phi.

Tom and Linda believe in WSU, and are willing to share their expertise to help the university improve. Their attitude is always, ‘How do we get better?’ And when they commit, they serve, lead, and engage. 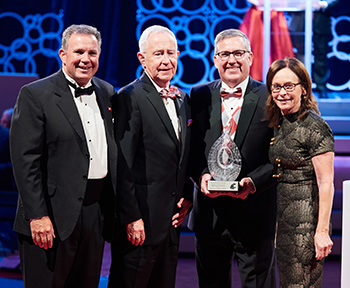 Tom and Diana Prenguber’s relationship with WSU is remarkable, and WSU has always been a central part of their lives. In the 1970s, when they were undergraduates, the two met and Tom fell in love with Diana—his “Cougar Sweetheart.” Their enthusiasm for WSU is contagious. And for those who know them best, that enthusiasm overflows on game days in the fall when they cheer on the Cougs.

The couple are proud Benefactors who generously support a range of areas across WSU, including Cougar Athletics, the Libraries, Carson College of Business, CAHNRS, and the Alumni Association. Their financial support is only part of the story. Tom and Diana also champion WSU, the Foundation, and Cougar Athletics. In 2001, they received the WSU Foundation’s Outstanding Service Award for their collective efforts to advance philanthropy at WSU. This was the first time a couple received the award. It should also be noted that Diana was the first woman honored with the award. Sadly, Diana passed away in April 2019, but her impact on WSU will never be forgotten. 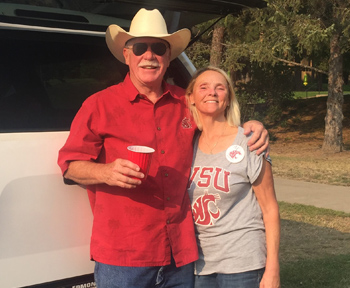 Greg Rankich is the epitome of a true Cougar fan. Following the worst four-year span in WSU football history (9-40 record) when giving to WSU Athletics was a low priority for most, Greg stepped up with the largest gift in Athletics history. His transformative gift inspired the next generation of Cougar Athletic Fund members to step up as well to make a difference for all Cougar athletes.

Described as the “ultimate cheerleader for WSU,” Greg’s impact can be felt across the entire WSU system. With gifts in 22 different areas, Greg has built relationships with WSU leadership, deans, and advancement staff. He works tirelessly as an advocate for WSU, recruiting new members into the Cougar family. 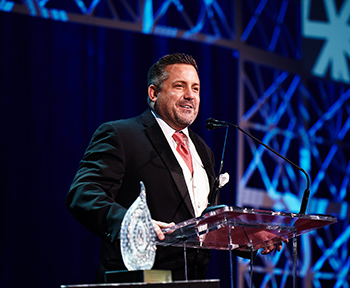 Among the many tributes submitted for the nomination of Glenn Osterhout for the 2016 Brotherton Cougar Spirit Award, one statement says it best: “I can always count on Glenn—as do others—to motivate and inspire me to do more for Washington State University.”

Described as “the consummate volunteer,” Glenn is an inspirational figure—selfless and humble, yet vocally proud of his alma mater. His passionate leadership is moving WSU forward in a meaningful way. Celebratory events such as “A Night with Cougar Football” and “CougsFirst!” trade show, the grassroots legislative movement WSU Impact, and the Steve Gleason Recruiting Room in the Football Operations Building, are the most visible of Glenn’s Cougar pride, and clearly demonstrate the impact he is making on the University and community he loves. 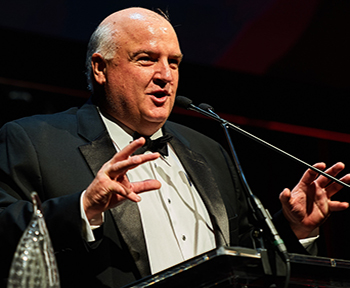 Community service is deeply rooted in Gary Schneidmiller’s family. His parents, Manuel (“Mannie”) and Gladys Schneidmiller, set the example by making a positive impact on their North Idaho community. Their influence continually guides his loyalty and commitment to Washington State University and Cougar Athletics. So it is exceptionally fitting that Gary T. Schneidmiller is the 2015 recipient of the William F. “Biff” Brotherton Cougar Spirit Award.

Student-athletes at WSU are empowered by the Manuel and Gladys Schneidmiller Endowed Athletic Scholarship, which Gary established to honor his parents. His philanthropic spirit also resonates for all Cougs to enjoy in the “Cougar Pride” bronze statue presiding over the Stadium Way entrance to Martin Stadium. The commanding symbol of WSU’s cougar mascot is Gary’s gift to his alma mater—a bold statement reflecting the strength and power of student-athletes pursuing higher education. 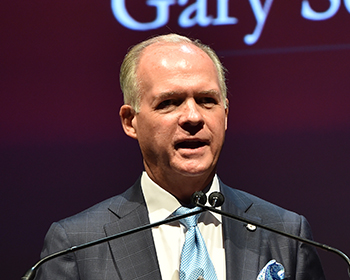 A loyal and faithful volunteer for Washington State University and WSU Athletics for more than 40 years, Wayne Walther (’68) is the 2014 recipient of the Biff Brotherton Cougar Spirit Award.

Created to honor the legacy of a generous and passionate alumnus, the Biff Brotherton Cougar Spirit Award recognizes individuals who demonstrate boundless Cougar spirit through their support and volunteerism.

The depth and breadth of Wayne’s engagement with WSU is wide-ranging; he is an advocate of students and quality experiences in the classroom and in athletic competition. As a volunteer, he offers insight, support, and action to help attain the highest aspirations of his alma mater. Numerous committees within the WSU Foundation and Cougar Athletic Foundation have benefitted from Wayne’s can-do attitude and get-it-done approach.

Wayne’s generosity and service to WSU is from the heart; never for his own glory but for the greater good of the Cougar community. 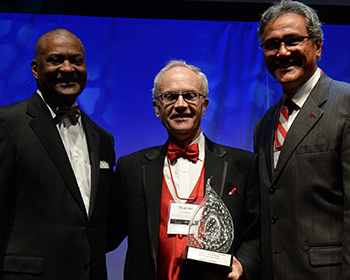 “Long after he wowed fans with his performance on the field as a student-athlete, Jack Thompson is a very special Coug who continues to make Washington State University and Cougar Athletics better through his active volunteer service,” said WSU President Elson S. Floyd. “With this honor, the WSU Foundation and Washington State University recognize the profound impact Jack’s involvement makes on the lives of WSU students.”

Thompson has been an active volunteer and supporter of WSU and Cougar Athletics for more than 25 years. He is a member of the WSU Foundation Board of Trustees and the Cougar Athletic Fund Advisory Council. He has also served on the Athletics Campaign Committee, Gray W. Executive Board, and the College of Business Hospitality Business Management Advisory Board.

In November 2009, Thompson helped WSU and World Vision join forces to meet the ongoing needs of American Samoa residents following the devastating tsunami that struck the region two months prior. The goal was to get Cougars fans prior to the UCLA game to “Fill the Helmet” to help traumatized children and families receive much-needed supplies.

During his time at WSU, Thompson established Pacific-10 Conference and WSU records for passes attempted (1,086), passes completed (601), and total plays (1,345). He tied the conference mark for touchdown passes (53) and touchdowns responsible for (63). As a sophomore in 1976 he set a conference record for passing yards with 2,762, completions (208) and touchdown passes (20) and the following season became the first junior in the history of the conference to surpass the 5,000 yard barrier in passing.

Following his senior season he was named a First-Team All-American by the Sporting News and was selected by the Cincinnati Bengals as the third overall pick in the 1979 NFL Draft. He was recently named one of seven inductees named to the inaugural Polynesian Football Hall of Fame class, and is one of only two football players to have his number retired at WSU. 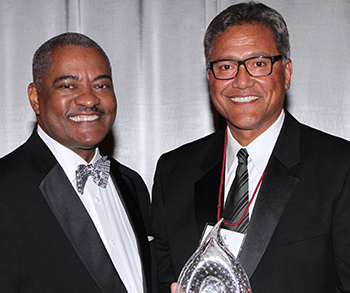 “To receive this award is to be recognized for a true demonstration of the Cougar Spirit,” said WSU President Elson S. Floyd. “David Pollart’s support of and involvement with WSU over the past four decades has made a significant impact on the quality of programs at our University that will continue for generations to come.”

Pollart has been an active volunteer and supporter of WSU and Cougar Athletics for more than 40 years. In addition to his support of the Martin Stadium renovation project and other programs throughout the institution, he established an endowed scholarship, the Pollart Scholarship in the Arts, to support students interested in the arts.

He served on the WSU Foundation Board of Trustees 1991-1997, the Martin Stadium Builders Executive Board 1971-1983, and the Athletics Campaign Committee 1993-1996. In 2000 he received the WSU Foundation’s Outstanding Service Award.

Upon graduating from WSU in 1967, Pollart joined Provisioners Express, Inc., a specialized refrigerated trucking company founded by his father in 1959, as president. Pollart retired in 1999 and remains an active supporter of WSU. 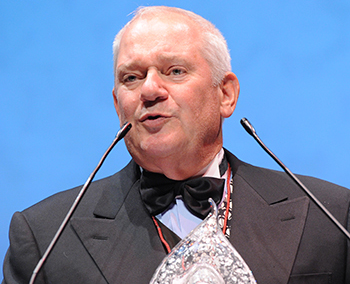