Scholarships and part-time jobs made John (’68 Pharm.) and Claudia Swenson’s WSU experience possible. Until his third year, John was a student-athlete, but then worked as a housekeeper while he completed his studies in pharmacy. And although Claudia held a President’s Scholarship, her teaching assistant position helped with her expenses as a student in the Honors Program.

Having experienced the working student life, they empathize with today’s students who face higher educational costs than ever before and want to help those who may turn away from professional degree programs due to finances. 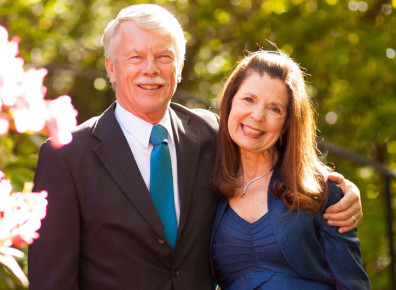 “We love WSU and want the best for its students,” say John and Claudia. “I received support on two different occasions that helped me through and I want to help other students obtain the excellent education and college experience that I received,” adds John.

Proudly connecting their professional success to their WSU education and student experience, John and Claudia have given annually to the Pharmacy Dean’s Fund for Excellence since 1991. Ultimately the Swensons’ wish is to provide WSU students the opportunity to accomplish their goals and achieve happiness.

“We hope to reduce the financial burden to encourage pharmacy students to follow their passions versus having to consider the highest-paying job because of issues with paying back loans,” says Claudia.

After John graduated, the couple married and moved to California’s Bay Area where he worked as a pharmacist intern and then served in the US Navy while Claudia studied at UC Medical Center-San Francisco, graduating in 1971.

John and Claudia have led successful and rewarding careers in pharmacy, receiving several leadership and service awards throughout their careers, which they attribute to their WSU experience.

“My pharmacy professors emphasized that we would only achieve what we worked for,” says John. “I learned to be a participant in life, work to be helpful to others, not be afraid of challenges, and when a good opportunity occurs, be a leader and take it.”

Among Claudia’s accolades during her 42-year career are the Group Health Cooperative award for participation in Cardiac Roadmap in 1998, the Madigan Army Medical Center Commander’s Award for Distinguished Service in 2009, and fellow of the American Society of Health System Pharmacists in 2007. In 1988, she was president of Seattle Area Society of Health System Pharmacists.

Also devoting much of his time to WSU, for six years, John served on both the WSU Foundation Board of Trustees and the Dean’s Advisory Council in the College of Pharmacy. Reflective of his loyalty and dedication, he received the WSU Foundation Outstanding Service Award in 2005, the WSU College of Pharmacy Outstanding Alumna of the Year in 2000, and the Duff and Dorothy Kennedy Making a Difference Award in 2000.

John and Claudia now live in Washington’s beautiful Chelan region, where they are affiliated with pharmacy operations at Central Washington Hospital in Wenatchee.