Paul G. Allen and representatives of the Bill & Melinda Gates Foundation were joined today by Washington State University officials and other donors and special guests to formally dedicate the Paul G. Allen Center for Global Animal Health in Pullman. The recently completed 62,000-square-foot, three-story flagship research building is a first-of-its-kind research facility that will house a state-of-the-art infectious disease research center for investigating emerging diseases throughout the world. 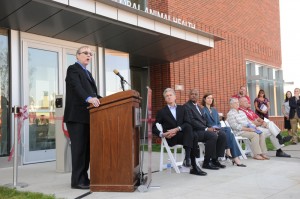 “Today represents an important milestone in our University’s long and distinguished history,” said WSU President Elson S. Floyd. “Opening this facility is a monumental step toward becoming the preeminent institution in the detection, prevention, and treatment of diseases that affect animals and move from animal to human populations, locally and globally.”

“We must as an institution strive to improve quality of life,” he said. “It begins here and will ripple out to the rest of the world.”

The new facility also provides WSU with what is referred to as “surge capacity,” meaning that if there were an outbreak of an infectious disease, such as foot-and-mouth disease or avian influenza, WSU scientists can quickly dedicate an entire floor of the building to surveillance and suppression efforts.

“As advanced as this building is, it is the innovative research, education, and outreach originating inside its walls that will have real global impact,” said Floyd.

Multidisciplinary approach to disease intervention
Zoonotic diseasesor infections transmitted from animals to humansaccount for more than 70 percent of human infectious diseases, with a disproportionate impact in the developing world.

“When we look globally, we recognize that so many people living on less than $2 per day are dependent on livestock for economic and food security,” said Guy Palmer, WSU’s Regents Professor of Pathology & Infectious Diseases, the Jan and Jack Creighton Endowed Chair of Global Animal Health, and director of the Allen School. “For these individuals and their families, and in fact for all of us, survival depends on the health of animals.”

Researchers at the Allen School for Global Animal Health seek innovative solutions to global infectious diseases challenges through a multidisciplinary approach to research, education, global outreach, and application of disease control at the animal-human interface. According to Palmer, disease intervention is as much about economics, policies, politics, and people as it is about science.

Unique to this program, graduate students work in a curriculum that integrates disease transmission and prevention research with economics, policy, and political science. WSU’s veterinary students also have opportunities to gain valuable research and laboratory experience by working with global animal health researchers during their four years in the doctorate program.

“Meeting our mission and implementing change requires that we work across boundaries of traditional disciplines to fully engage expertise from economics to engineering, from finance to foreign languages, communication to cultural anthropology. We must develop novel strategies for disease surveillance and intervention that are not only effective, but are sustainable for the populations with whom we work,” said Palmer.

Private-public partnerships
The School for Global Animal Health was established in the College of Veterinary Medicine in 2008 to focus WSU’s considerable expertise in infectious disease research and outreach and to build on those efforts to create a world-leading program in the field. Soon after the creation of the school, the Bill & Melinda Gates Foundation announced a $25 million grant toward the construction of a new facility on WSU’s Pullman campus to house the headquarters and major research labs for the school.

“For WSU, the support of the Bill & Melinda Gates Foundation validated the caliber of WSU’s work in the field of global health, and changed the trajectory for philanthropic support for WSU overall,” said Floyd. 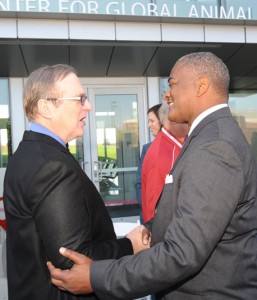 Seattle entrepreneur, philanthropist, and WSU alumnus Paul G. Allen announced his commitment of $26 million to complete the construction of the new facility and to provide operational funding for the school in December 2010, in conjunction with the public launch of the $1 billion Campaign for Washington State University. His gift will add more than 20 research scientists in Pullman and throughout the world by 2020. It also establishes research programs in Africa and builds laboratory capacity in joint exchange programs and graduate education between WSU and institutions in Kenya and Tanzania. The number of graduate students conducting research is also expected to grow to more than one hundred.

“This school will not only educate students in the increasingly important field of animal health, it will be a hub for cutting-edge research and progressive ideas,” said Paul G. Allen. “The school’s scientists will be at the forefront in the fight against diseases that affect both humans and animals, and their impact will be felt all around the world.”

In recognition of his transformational support, WSU officially named the School for Global Animal Health, and the Center in which it is headquartered, after Paul G. Allen.

“Paul and his sister, Jody, are passionate about improving lives for people around the world, and in Africa in particular,” said Floyd. “I am immensely proud they found a strong partner in this effort right here at Paul’s alma mater.” 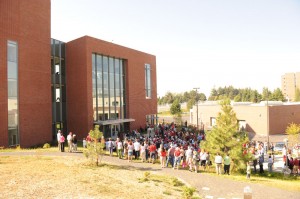 The commitments from Paul Allen and the Bill & Melinda Gates Foundation are among the largest private contributions In WSU’s history. Additional support for the project was also provided through bonds issued by the State of Washington and the generosity of many donors, including Ty Scheumann, H. S. Wright, III, Mikal and Lynne Thomsen, and Jan and Jack Creighton. The Jan and Jack Creighton Endowed Chair for Global Animal Health provides an important source of funding to strategically launch new initiatives that advance the school’s objectives.

“I extend my heartfelt thanks to Paul Allen, the Bill & Melinda Gates Foundation, and to each and every person who generously provided critical support to make this remarkable building a reality from its planning and design to its funding and construction,” said Floyd.

Zimmer Gunsul Frasca Architects with offices in Seattle as well as Portland, Los Angeles, New York and Washington, D.C., handled the design work, and Bouten Construction with offices in Spokane and the Tri-Cities led the construction of the new facility. Engineering work was completed by Affiliated Engineers N.W. and KPFF Consulting Engineers in Seattle.