Paul G. Allen, investor, philanthropist, WSU alumnus, and co-founder of Microsoft Inc., has made the largest gift to Washington State University in the school’s history: $26 million to support programs and fund construction of WSU’s School for Global Animal Health. 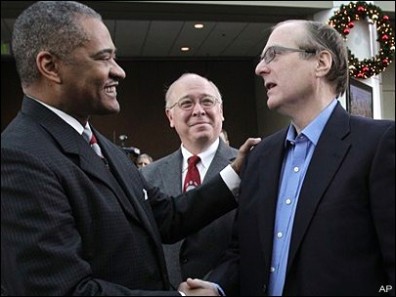 The gift was announced Dec. 2, 2010 at the Washington State Convention and Trade Center during statewide events to launch the public phase of The Campaign for Washington State University: Because the World Needs Big Ideas.

Begun in July 2006, the campaigns goal is to raise $1 billion by 2015 to coincide with the University’s 125th anniversary. To date, $532.2 million has been committed to the campaign.

“Washington State University has been important to me since I was a student there in the 1970s. Our family foundation, under the leadership of my sister Jody, has supported a number of programs at WSU. And today, I am happy to be able to make a significant personal gift to help WSU broaden its reach and touch many more lives,” Allen said. “Expansion of the School for Global Animal Health will foster important research to improve Africa’s capabilities to respond to animal-borne diseases. I also look forward to seeing faculty and student exchanges that will tie WSU to communities in Africa in lasting ways.”

“Paul Allen’s vision is matched only by his tremendous generosity,” said WSU President Elson S. Floyd. “As his alma mater, WSU is honored to receive such a transformational gift. It will make a lasting and profound difference in the effort to improve the health and quality of life of people across the state of Washington and worldwide.”

The gift will support the mission of the School for Global Animal Health, which is providing solutions to international health challenges through detection of pathogens, control of disease transmission, and vaccine development.

Part of the gift will be used to complete the funding needed for construction of the $35 million School for Global Animal Health Building, which is partially funded through a $25 million grant from the Bill & Melinda Gates Foundation. Construction on the 62,000-square-foot research building began on the Pullman campus in June; completion is expected in spring 2012.

The school and its researchers work to unlock the secrets of zoonotic diseases, infections that are transmitted from animals to humans. Those diseases account for more than 70 percent of human infectious diseases, with a disproportionate impact in the developing world.

Currently, the School for Global Animal Health has eight research scientists; 12 affiliated faculty, which are joint positions with other WSU-based departments, and five adjunct faculty, who are based in institutions outside the United States.

During the next 10 years, in large part through the Allen gift, the school plans to add more than 20 research scientists in Pullman with extensive outreach in Africa and throughout the world. The number of graduate students conducting research is expected to grow to more than 100 by 2020.

The gift will allow the University to move forward with its plan to establish research programs in Africa and build laboratory capacity in joint exchange programs and graduate education between WSU and institutions in Kenya and Tanzania. By the end of the 10-year period, the goal is to help those programs to become self-sufficient.

“Paul Allen’s gift is remarkable in terms of its commitment. This gift leverages WSU’s capacity over a 10-year period to develop true partnerships with our international colleagues,” said Guy Palmer, Regents professor and director of the School for Global Animal Health. “The result will be healthier animals, healthier and more economically secure families, and a brighter future for some of the most gracious and hardworking people in the world. We are honored by Paul’s trust and are committed to fulfilling our shared vision.”

The announcement of the Allen gift was a highlight of Thursday’s statewide kickoff of the public phase of The Campaign for Washington State University: Because the World Needs Big Ideas.

Allen received the University’s highest honor, the Regents Distinguished Alumnus Award in 1999. He attended WSU from 1971 to 1974, left to work in the computer industry in Boston, and then founded Microsoft with his friend Bill Gates in 1975. He remained the company’s chief technologist through 1983.

Allen’s diverse investment portfolio includes holdings in real estate, technology, media, and other companies. He also owns the Seattle Seahawks of the National Football League, the Portland Trail Blazers of the National Basketball Association, and is part of the ownership group for the Seattle Sounders FC, Seattle’s Major League Soccer team.