College Bound, With an Interception

Washington State University senior Spencer Anderson had always planned to attend college, perhaps even graduate school. “Both my parents graduated from college,” he said, “so secondary education was expected of me.” At WSU, Spencer majors in communication and broadcast journalism, and minors in sports management. 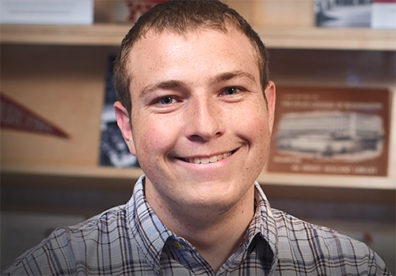 Spencer was born and raised in the Tri-Cities in Washington. He confessed he “wasn’t the most creative or imaginative kid growing up.” By the time he reached middle school, he’d set his sights on a career in the NFL. “Then I realized I wasn’t that athletic either,” he laughed. So, instead Spencer went on to become “The Voice” of Hanford High School’s football, basketball, volleyball, and wrestling webcasts. He especially enjoyed announcing the play-by-plays, which piqued his interest in broadcasting.

During the spring of his junior year in high school, Spencer was well on his way to a future in broadcasting when he was diagnosed with non-Hodgkin’s lymphoma, a cancer that begins in cells called lymphocytes, part of the body’s immune system. Spencer endured five agonizing months of chemotherapy, which made him very ill and affected his ability to concentrate for long periods of time. He had to leave high school temporarily.

The Make-A-Wish Foundation, the non-profit organization that arranges the wishes of young people facing life-threatening medical conditions, contacted Spencer. Spencer’s “Wish” was to sit in the broadcaster’s booth during a Seahawks game. And it was during that trip to Seattle that he met former Seahawks player and broadcaster Craig Terrill.

Terrill told Spencer about WSU’s Edward R. Murrow College of Communication, nationally ranked for its research publications and submissions, and named for its most noted alumnus, Edward R. Murrow. Eventually, Spencer was able to return to school and complete all the requirements for his high school diploma.

He went on to earn his associate’s degree and, according to him, transferred to WSU because of the prestige of the Murrow College, and because the Pullman campus is relatively close to the Tri-Cities. Spencer said, “I’m glad I took Craig Terrill’s advice.”

Initially, Spencer’s parents had concerns about the overall cost of education, but thanks to private support he received from WSU and other sources he is proud to be able to call himself a Coug. The recipient of a University Achievement award totaling $8000 over two years, Spencer also received awards from the Murrow College, Tri-Cities Steelband Association, Benton Rural Electric Association, Hanford High School Drama Boosters, and the Ewing C. Kelly Foundation.

“I can hardly express or comprehend how much their generosity and support has helped me pursue my dreams.”

This school year, Spencer moved back into the dorms after a year of living in town. He said living on campus made him feel more connected to student life. “I love how in our college town,” he said, “everyone supports the Cougs. The community support is palpable.” As for academics, Spencer said his professors are knowledgeable and helpful. “The faculty across WSU truly care about their students on an individual level,” he said. “I really appreciate that.”

Play-by-play announcing is Spencer’s career goal, and he’s invested most of his time working at KUGR: Cougar College Radio on-campus. KUGR enables students to host a two-hour weekly show, which includes political talk, sports, and everything in between. Spencer also has spent two semesters writing for The Daily Evergreen and one writing for WSUcougars.com. “Through my coursework and participation in WSU clubs,” he said, “I’ve gained leadership skills and the ability to adapt. As KUGR Sports Director, I’ve discovered how I best work with other people.”

After earning his degree, Spencer plans to enter the workforce either through an internship with a professional team or starting as a play-by-play broadcaster for a short-season minor league team. He said, “The challenges of journalism have taught me to be flexible.” Spencer also confirmed that WSU has helped prepare him for life after college.