Dr. Thomas Besser, professor in Washington State University’s Department of Veterinary Microbiology and Pathology, and adjunct faculty at WSU’s Paul G. Allen School for Global Animal Health, is internationally-recognized as a leader in bighorn sheep disease research. During the first part of his career, however, Besser’s work focused on food safety research to reduce human disease risks. He developed practical measures to decrease the frequency of human food-borne and zoonotic disease agents, such as Salmonella and E. coli O157:H7, which can be acquired from cattle and other livestock.

Besser’s research path took an interesting turn in 2006, when, a student in his lab was conducting a summer research project. The student discovered unexpected results while analyzing and diagnosing the lungs of bighorn sheep lambs with pneumonia. That work led to studies showing the bacterium Mycoplasma ovipneumoniae played a previously unrecognized and key role in that disease.

Through collaboration with many other researchers and biologists at multiple state wildlife agencies, Besser and his colleagues demonstrated that M. ovipneumoniae is the primary pathogen that causes bighorn sheep pneumonia, while non-pneumonic wild sheep populations typically are free of this pathogen. Their collaborative work also produced a dramatically better understanding of a disease problem recognized as the major barrier to recovering bighorn sheep populations across North America.

In previous studies, researchers have shown that M. ovipneumoniae infection inactivates the airway defense mechanism that normally protects animals from inhaled bacteria. As a result, bighorn sheep with pneumonia characteristically develop multiple, simultaneous infections with a variety of bacteria that normally inhabit the nose and throat. In domestic sheep and goats, M. ovipneumoniae causes relatively mild disease, but when transmitted to bighorn sheep –which can occur when they interact on public rangelands or private lands–it causes them to develop a severe, often fatal, pneumonia that can decimate 80 percent of some herds.

“For decades,” Besser said, “with limited success, scientists have worked to develop a vaccine against bighorn sheep pneumonia.” For many reasons, including the diverse bacteria that contribute to fatal pneumonia, it is difficult to develop and implement a vaccine strategy for wild sheep. To complicate matters further, M. ovipneumoniae may persist in some survivors of the initial outbreak, which then serve as a source of the bacterial transmission to lambs, triggering fatal lamb pneumonia for years or decades afterward.

“We’ve learned a lot about how the disease works over the past few years,” Besser said. “So now I’m looking forward to trying to apply our new knowledge in preventing future outbreaks. This is a very difficult and complex problem, and a solution seems feasible only if we can work together with domestic sheep producers to develop practical and effective management tools.”

Recently, Besser and his colleagues have begun working with several university and privately owned sheep flocks to develop and evaluate methods to eliminate M. ovipneumoniae from domestic flocks, especially those nearby bighorn sheep populations that may represent a risk of disease to the wild sheep.

“I’m also working hard with wildlife agency biologists and veterinarians,” he said, “to develop tools to eliminate the carriers of M. ovipneumoniae from affected wild sheep populations to stop the ongoing lamb pneumonia losses,” Besser said. “I’m excited about the possibility of making more advances in the coming years.”

In January 2016, Besser was named the Rocky Crate D.V.M. and Wild Sheep Foundation Endowed Chair in Wild Sheep Disease Research. He succeeded Professor Srikumaran Subramaniam, who held the endowed chair since its inception in 2004. Privately funded and the first of its kind in the WSU College of Veterinary Medicine, the Rocky Crate chair position is dedicated exclusively to research on wild sheep diseases and graduate education.

Rocky Crate, a WSU veterinary alum (’69), was an avid big game hunter and member of the Foundation for North American Wild Sheep (FNAWS). In 1998, after passing away from cancer, Crate donated more than $1.5 million from his estate to WSU and FNAWs. “What I’d really like to see,” Crate had said, “is for WSU and FNAWS to find a way to prevent the contraction and spread of pneumonia in wild sheep—their number one killer. . . That’s it,” he added. “That’s what I want. It’s all about putting more sheep on the mountain.”

“It’s also important to recognize,” Besser said, “that the Wild Sheep Foundation and the organization’s state chapters have been generous annual contributors to this disease research.”

The contributions of the U.S. Forest Service, the U.S. Geologic Survey, and the U.S. Fish and Wildlife Service, and of many state wildlife agencies have all contributed greatly to the mission of recovering healthy populations of indigenous wild sheep to safeguard against their decline or extinction, and to fund programs for professional management of these populations.

Besser said, “I’m honored to have been appointed to Dr. Crate’s chair.” 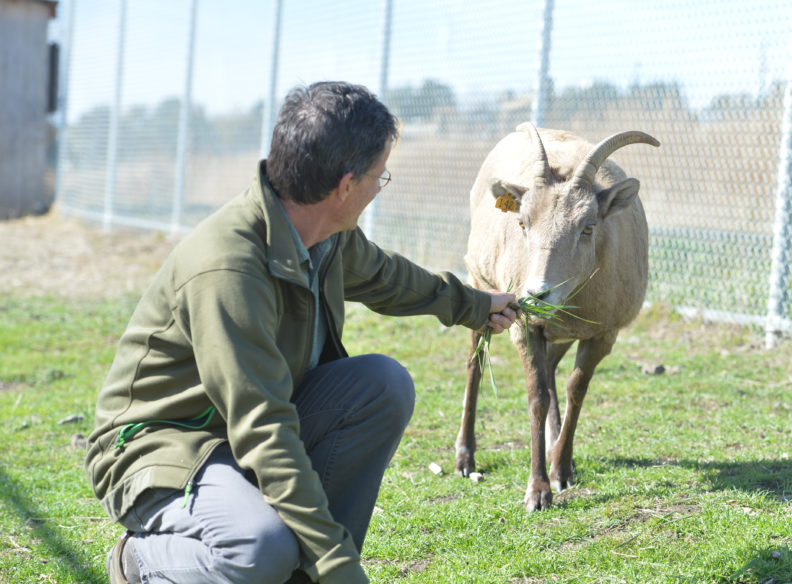