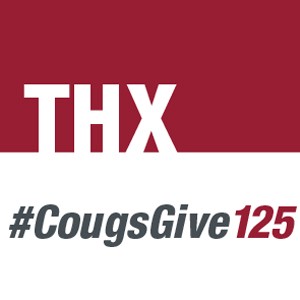 With gifts as small as $5 and as large as $25,000, Washington State University alumni, students, employees and friends rallied to participate in the university’s first official day of giving, which was held in conjunction with the celebration of WSU’s 125th anniversary.

The WSU Foundation confirmed today that 1,039 donors contributed $314,814 during #CougsGive125, which began at noon on March 26 and continued for 36 hours. #CougsGive125 challenged supporters to give $125,000 to support WSU students, faculty, research and programs.

“We felt that Cougar Nation would step up to be a part of making this inaugural giving day a success,” said WSU Foundation CEO John Gardner. “But what we could not have anticipated was the high level of excitement and generosity reflected throughout this effort.”

In addition to the success of #CougsGive125, an additional $1.75 million in estate and gift planning intentions were also documented on March 27.

Throughout the effort, donors generously gave to the colleges, campuses and programs that they cared about most. A broad range of programs received gifts during #CougsGive125 – from scholarships, to Cougar Athletics, to Northwest Public Radio and Television. In all, 29 different areas universitywide received gifts during the 36-hour challenge.

“The participation from our students, our alumni and friends, and our faculty and staff through their gifts and their advocacy via social media was tremendous,” said Tyrell Warren-Burnett, interim director of annual giving at the WSU Foundation.

“It was a lot of fun to see so much interest in supporting WSU’s students and faculty throughout this special day of giving,” he said. “Plans are already underway for the next #CougsGive day in 2016.”

All gifts received during #CougsGive125 are part of The Campaign for Washington State University: Because the World Needs Big Ideas (https://foundation.wsu.edu/campaign/). Continuing through June 2015, the nine-year campaign has raised more than $1 billion to increase support for WSU’s students, faculty and programs and to leverage the university’s impact across the state, nation and world.