Washington State University’s Museum of Art announced June 10 that it received an unprecedented gift of more than 200 fine art prints from internationally acclaimed artist Jim Dine. The gift—valued at nearly $2 million—creates the largest permanent collection of Dine prints at a university in the world.

“This is a complete career overview in printmaking by one of the most significant artists of our time, all from the artist himself,” said Chris Bruce, director for the Museum of Art/WSU. “It is unprecedented for our museum and we are breathless over the scope of this gift.”
Shipped from New York and London to WSU, the collection spans this important American artist’s 50-year career in printmaking. It also represents a comprehensive range of printmaking techniques.

“It is hard to believe, but I have known Jim since 1988 and have had the privilege of working with him on several exhibitions throughout that time,” said Bruce, “including one of the first exhibits I was involved with at WSU in 2004—‘Jim Dine: Sculpture from the Walla Walla Foundry.’
“Those familiar with WSU’s Pullman campus may recognize one of Jim Dine’s sculptures as the big blue heart at the center of campus, called ‘Technicolor Heart.’” 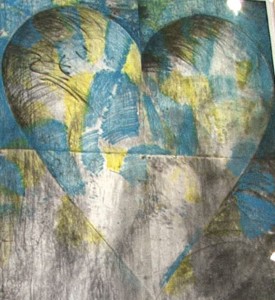 Dine chose to give the collection to WSU in part to honor Portland, Ore., arts patron and philanthropist Jordan D. Schnitzer, who announced in October 2013 his commitment of $5 million to launch the $15 million effort to build a new and larger Museum of Art at WSU. More than $9 million has been committed to the effort to date.

“Jim’s gift is representative of the remarkable quality of our collections,” said Bruce. “Through the construction of a new, state-of-the-art museum and gallery, we will help ensure that world-class art—like that of great artists like Jim Dine—will be accessible to the citizens and visitors of the Inland Northwest for decades to come.”