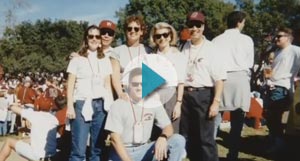 Ron and Heidi Stanley received the Weldon B. Gibson Distinguished Volunteer Award in 2010.

Ron is a 1978 graduate in Mechanical Engineering at WSU, where he was also a member of Sigma Nu fraternity and the Honors College.  Upon graduating from WSU, Ron joined the General Products Division of IBM in San Jose, CA and Tucson, AZ.  In 1985, he returned to Spokane to succeed his father in the family business, Empire Bolt & Screw, an international distributor of standard and special, made-to-print parts for original equipment manufacturers (OEM’s).  He is President & CEO.

Heidi received a degree in Business Administration in 1979 at WSU, where she was also a member of Kappa Alpha Theta sorority.  In 1980, she joined IBM in Tucson, AZ where she worked in the Accounting Dept. and Human Resource Dept. as a college recruiter.  She had a lengthy career in banking starting in 1985, culminating in the position of CEO & Chairman of Sterling Savings Bank.   Heidi was named one of the “25 Most Powerful Women in Banking”  by U.S. Banker Magazine in 2006 and 2007.  She is co-owner of Empire Bolt & Screw, where she currently serves as Chairman.

Ron and Heidi’s generous support for, and service to, WSU has been transformational over the past 28 years.  They were honored as recipients of the WSU Foundation Outstanding Service Award in 2002.  They served on the WSU Foundation Board of Governors from 2004-2008, and have actively served as members of advisory boards for WSU Spokane, WSU College of Business, and Cougar Athletics.

Ron and Heidi are benefactors of Washington State University.