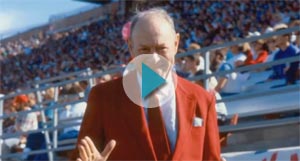 In a pleasantly ironic twist, an originator of the Weldon B. “Hoot” Gibson Distinguished Volunteer Service Award was himself recognized with the honor at the WSU Foundation’s thirty-second annual Recognition Gala in Seattle on October 21. Bob Smawley, often popularly known as “Mr. WSU,” joined the ranks of well-known award recipients such as Glenn Terrell, Philip Lighty, and “Hoot” Gibson himself.

Born and raised in the Palouse, Bob (‘52 Lib. Arts) began his lifelong career at WSU in the early 1950s, starting as ticket manager for intercollegiate athletics. He had met his wife, Carol (’52 Ed.), while they were students in Pullman. Over the next several decades he coordinated the Cougar Club, and worked at Business Affairs, General Services, the performing arts coliseum, alumni relations, and university relations. For a time he was superintendent of university police. He served under five presidents.

“He did just about anything that had to do with Washington State University,” says Glenn Terrell, WSU president from 1967 to 1985.

Bob has also served as WSU’s resident historian, bringing the University’s history to life. Before the age of PowerPoint or Facebook, he would show hundreds of slide shows to acquaint supporters and new employees with the WSU story.

An early proponent for building the current alumni center out of a large cattle barn, he still visits the Lewis Alumni Centre to this day, caring for landscaping and doing what he can to help keep it a beautiful part of the campus.

On and off campus, Bob is noted for his courtesy, dedication, and devotion as a family man. He and Carol have three daughters (all loyal Cougs), ten grandchildren, and twelve great-grandchildren.

“Bob’s tenure has to be over sixty years,” says Chris Marker (’64 Hotel & Rest. Mgmt., ’66 MBA), former chair of the WSU Foundation. “If you take the number of days of his career, that might be twenty, twenty-two, twenty-three thousand days. And I’ll bet not a single day went by that he didn’t raise a friend for the University or the Foundation.”