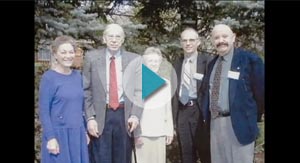 Lee Sahlin received a bachelors degree in Economics in 1947, and Education in 1948 from Washington State College. Lee taught high school in Rosalia, Washington and was the Executive Director of the Junior Achievement program in Spokane prior to joining Murphey Favre in 1955. In 1960, he became a Vice President and an owner of the company. He was elected President and CEO of Murphey Favre, Composite Research and Management, and its affiliated group of mutual funds in 1972, and in 1982, he was elected as Chairman of Murphey Favre, retiring in 1997.

Lee’s volunteer commitment to Washington State University pre-dates the formation of the WSU Foundation, beginning in 1971 with a long stint on the Martin Stadium Builders Executive Board. Lee was one of the founders of the WSU Foundation as a member of the Visiting Committee, and one of the first class of elected Trustees in 1979. Lee served on the Foundation Gift Acceptance Committee from 1993 to 2002; the College of Businessand Economics Advisory Board from 1977 to 1987; and the Spokane Planned Giving Advisory Board since 1994. He also chaired the Golden Grad Class Gift Project which, along with the Class of 1997, built the Memorial Arch on Pullman Campus.

Lee and his wife, Jody, endowed the Sahlin Faculty Excellence Awards in 1994 which honor outstanding faculty for research and creative activity, instruction, outreach and engagement, and leadership. The awards are making a lasting impact for WSU and will remain meaningful into perpetuity.

Lee and Jody are Benefactors of the WSU Foundation.