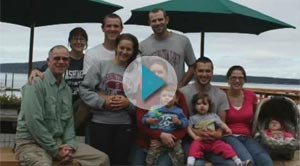 Ken and Sue Christianson are the 2012 recipients of the WSU Foundation’s highest volunteer honor, the Weldon B. Gibson Distinguished Volunteer Award.

“Ken and Sue are remarkably dedicated to advancing excellence at WSU,” says WSU President Elson S. Floyd. “Their enthusiasm shows in everything that they do—and more importantly, everything they encourage others to do—for this university. Their efforts have been transformational for programs across WSU—from scholarships and athletics to the Greek community and WSU’s research and extension center in Mount Vernon.”

The Christiansons, both WSU graduates, have been active volunteers and supporters of WSU for more than two decades. Ken served on the WSU Foundation Board of Trustees 1995-2001and the foundation’s President’s Associates Cabinet 1998-2004.

As chair of WSU’s Mount Vernon Revitalization Committee, Sue led a successful $1.5 million fundraising effort in 2005 to help ensure WSU’s Northwestern Washington Research and Extension Center in Mount Vernon will continue to impact the region. She has served as a deputy with the WSU Alumni Association in the northwest region for the past 23 years.

Ken and Sue were 2005 recipients of the WSU Foundation’s Outstanding Service Award. They also serve on the College of Agricultural, Human & Natural Resource Sciences (CAHNRS) and WSU Extension National Campaign Council to help guide the college’s $236.5 million goal during the university’s $1 billion Campaign for Washington State University: Because the World Needs Big Ideas.

Sue received the CAHNRS Women’s History Award in 2010 in recognition of her community leadership and public service.

The Christiansons proudly champion their Greek organizations at WSU as well. Sue’s sorority, Alpha Gamma Delta, has benefited from her involvement and advice over many years, and Ken has been an active, hands-on alumni leader of his fraternity, Sigma Phi Epsilon.

“It feels good to do things for others. We could not have done all that we have for WSU without the support and love of our family,” Sue said while accepting the honor and surrounded by friends and family.

The Weldon B. Gibson Distinguished Volunteer Award, named for WSU Foundation founding Chairman Weldon B. “Hoot” Gibson, is the premier award granted by the WSU Foundation to recognize individuals whose service on behalf of the foundation can only be measured by the highest levels of achievement.