For more than 50 years, Necia Bennett Huntley’s commitment to WSU has been steadfast. When asked what drives her philanthropic motivations, she says simply and emphatically, “It’s something that I want to do.” 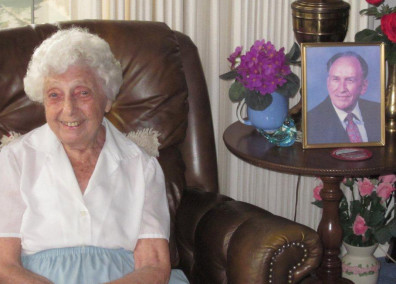 Necia holds dear the lasting memories of her time at then-Washington State College. It was at WSC where she met Bud, who was studying pharmacy. They dated as students but sadly, Bud had to interrupt his education because of financial difficulties. He proposed to Necia and fulfilled his promise to marry her after her graduation.

Following in his father’s footsteps, Bud represented Whitman County in the state legislature for several years, serving five terms in the state house (1956–66) and three terms in the state senate (1967–73). They moved to Olympia when Bud accepted a gubernatorial appointment as Utilities and Transportation Commissioner.

“He worked for the good of Washington State University,” Necia said, noting that the scholarships that bear their names are tributes to Bud’s dedicated service to the state and to WSU.

Bud served on the Visiting Committee which led to the formation of the WSU Foundation. They became President’s Associates in 1981 and were among the first alumni to be Legacy Associates when they informed the University that they had chosen to leave the Huntley family farm to WSU through their estate. Necia served on the WSU Foundation Board of Trustees from 1996 to 2002 and remains engaged with WSU today as a Trustee Ambassador.

Necia will celebrate her 100th birthday in December, and earlier this fall she was recognized as a WSU Diamond Donor—an honor highlighting her 50 years of giving to the University. She is also a Silver Laureate of WSU. Silver Laureates are among the University’s most esteemed alumni and friends, having directed between $1 million and $5 million in gifts, grants, or pledges to WSU.

She continues to share her love for WSU through her ten nieces and nephews who are also Cougar alumni, and a great-niece and two great-nephews who are currently students at WSU.