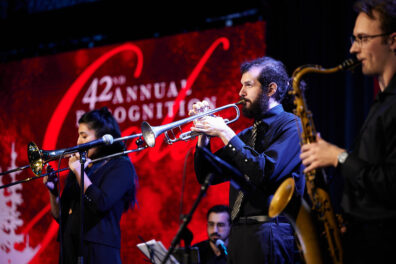 Before a stage backdrop of glittering indigo curtains and panels of shimmering crimson, the Jazz Wires (right), an ensemble of WSU alumni, played one of their upbeat instrumental arrangements, setting the festive ambience for the celebration of the WSU Foundation’s 42nd Annual Recognition Gala held Tuesday evening, April 26, at the Sheraton Grand Seattle.

Honorees and other members of the WSU community enjoyed dinner at candlelit tables glowing in the dimmed ballroom—everyone dressed in their finest and full of Cougar spirit.

Looking dapper in a crimson and gray vest and matching bow tie and black tux, President Kirk Schulz addressed both the 150-plus in-person attendees as well as another 250 watching via live-stream. The annual gala, he said, “is one of the most fun events of the year,” a much-anticipated opportunity to celebrate the “generosity of the Laureates and Crimson Benefactors that allows the university to have big aspirations.” And he cited some of them:

“We want to be one of the top 25 research universities in the country. We want all six of our campuses to thrive and have the resources to be successful. We want to give our faculty the tools they need to do cutting-edge research, and to work with our students . . . and we want our students to have the necessary financial support to come to WSU and be successful and walk across that stage with their bachelor’s, master’s, or PhD and look back and say that this was one of the most important experiences of my life.”

That was what the entire evening was about: celebrating the extraordinary and generous people making such things possible at WSU.

Brady Wakayama, ’16, a familiar face on Seattle TV at KING 5 Local News, emceed the gala, leading the audience on a journey of Cougar philanthropy and the many stories of its impact on alumni, faculty, and students.

Many of those stories were presented in engaging videos of Crimson Benefactors (those whose contributions to WSU have reached $500,000 in lifetime giving), such as Kathleen and Jonathan Altmann, who established the Honey Bee and Mycelium Fund to support research to find solutions to the early effects of climate change at WSU’s Honey Bee and Pollinator Research, Extension, and Education Facility.

Another video of WSU Laureates (those whose contributions to WSU have reached the $1 million giving milestone) told the story of the late Joanne Washburn, whose 30-year career at WSU was dedicated to advancing equal opportunity for women in sports—Washburn’s love for WSU culminating with an estate gift to establish the Joanne Washburn and Sue Durrant Endowed Scholarship for Sport Management.

There were also inspiring stories of WSU faculty members and their work, made possible by the endowed chairs created by private philanthropy. But the most poignant stories of the evening came from three articulate WSU students who each, while overcoming considerable obstacles, were able to excel in their studies through the scholarships they received. Each of them spoke of how their WSU educations had changed their lives in a way they never thought possible.

One of these students, Friedrich Ross, overcame homelessness and excelled in studying applied mathematics focused on data analytics at WSU Vancouver. Ross spoke movingly about the transformative power of his education.

“Having people believe in you is huge,” he said about WSU faculty and those who made his scholarship possible. “What drives me today is becoming more than I thought I was capable of and becoming more involved in life in a meaningful way.”