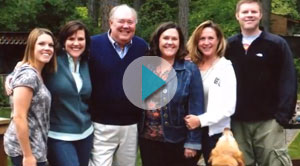 “Larry Culver embodies the can-do spirit unique to WSU alumni,” said WSU President Elson S. Floyd. “Whether it is hosting a gathering of alumni at his home or lending his time and energy to the many WSU volunteer roles he has taken on over the years, Larry is among the first to step up to lend his support, vision, and leadership to make Washington State University a more vibrant place for our students. I cannot think of a more fitting recipient for this esteemed honor.”

Larry has been an active volunteer and supporter of Washington State University and the WSU Foundation for more than 23 years.

Larry has served on WSU’s College of Business Campaign Committee, National Board of Advisors, and the Hospitality Business Management Advisory Board, as well as WSU’s Golf Course Committee. He also played an important role in connecting WSU to the J. Willard and Alice S. Marriott Foundation, which in turn provided a $1.5 million gift to renovate the teaching kitchen and dining room facilities in the J. Willard and Alice S. Marriott Hospitality Teaching Center in WSU’s College of Business.

Larry received the WSU Foundation’s Outstanding Volunteer Service Award in 1999, and the School for Hospitality and Business Management in WSU’s College of Business honored him as a 75th Anniversary Honoree in 2007 for his contribution to the hospitality industry throughout his career. He and his wife, Vickie, have also been honored as Laureates for their generous support of Washington State University.

Larry earned a bachelor’s degree in hotel and restaurant administration from WSU’s School of Hospitality Business Management in 1964 before embarking on a successful career in the hospitality industry spanning more than 45 years. He managed several hotels and restaurants throughout the United States early in his career before helping to found Innco, Inc., a developer and manager of Hilton, Sheraton, and independent hotels in eight Midwestern states. Larry served nine years as President of Innco, Inc. By 1982, he founded InnVentures, Inc., a hotel property development and management company with Marriott and Hilton properties in Washington, Oregon, Idaho and California, becoming Chairman and Chief Executive Officer in 1987 until his retirement in 2011.