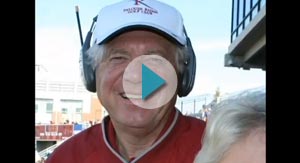 Barry received a degree in Business Administration in 1955 from Washington State College where he was a member of Alpha Tau Omega fraternity and very active in student government. He joined the family business, Central Business Property Co., in 1958 as vice president and insurance broker. In 1968, the business was merged with Fidelity Associates Insurance and Financial Services with Barry as President. Over the next 40 years, he developed the business into one of the top 5% of the insurance brokerage firms in the United States. In 2006, the firm celebrated its 100th Anniversary with management by four generations of the Jones Family. Barry retired as Chairman Emeritus in 2008.

Barry Jones is the consummate Cougar. Barry was elected President of the Alumni Association in 1969. He was a member of the Visiting Committee which had a role in the formation of the WSU Foundation in 1979. He served on the Trustee Campaign Committee, from 1993 to 1996; Spokane Presidents Associates Council, 1997; College of Business Advisory Committee, from 1979 to 1998; WSU Foundation Board of Trustees, from 1978 to 1984; and various other committees.

Barry and Carole are Benefactors of WSU.