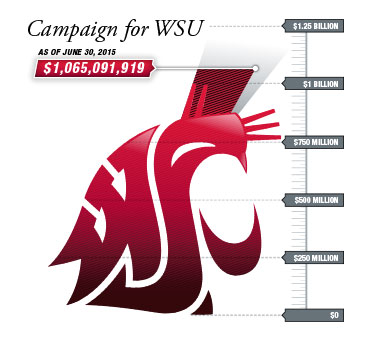 Officials at Washington State University announced today that the school’s most ambitious fundraising effort eclipsed its $1 billion goal and realized its most successful year of fundraising in fiscal year 2015.

Washington State University Interim President Dan Bernardo praised the commitment of alumni, friends and corporate partners who helped the university reach its target. “This campaign truly will transform WSU’s ability to tackle the grand challenges we face as a state, nation and world in the years ahead,” he said. “The effort has taught us all to recognize this is really just the beginning for where private support for WSU’s students, faculty, research and programs can change the world in very tangible, lasting ways. Thanks to this remarkable investment, we have an opportunity—a responsibility—to take this university to new heights.”

The Campaign for Washington State University: Because the World Needs Big Ideas surpassed its $1 billion goal six months ahead of schedule on its way to a total $1,065,091,919 in total private support. WSU donors committed more than $166 million in private support during fiscal year 2015—which ran from July 1, 2014-June 30, 2015—making the final year of the campaign the top fundraising year in school history.

Chaired by WSU alumnus, retired Boeing executive and WSU Regent Scott Carson, the public phase of The Campaign for WSU launched in December 2010 with events in Seattle, Pullman and throughout the state.

“This is a historic time for Washington State University,” said Carson. “Meeting our campaign goal in the midst of WSU’s 125th year is a remarkable accomplishment and a direct testament to the overwhelming support from our loyal donors. So many people have invested in the success of this campaign and this great university. We cannot thank them enough.”

Carson also acknowledged the critical role played by WSU President Elson S. Floyd, who died on June 20 following a battle with cancer. “Perhaps most influential in the success of this effort was the vision of President Floyd, whose dynamic leadership propelled this university to achieve so much in the eight short years he was at the helm,” Carson said. “Thanks to him, this campaign never lost momentum. It is among the many remarkable legacies he leaves with this university and the state it serves.”

The campaign consisted of private commitments from a number of sources, including more than $331 million from alumni, $195 million from students, parents, faculty, staff and other non-alumni, $380 million from granting agencies, nearly $96 million from corporations, and $158 million from foundations and other organizations.

“The impact of this campaign will be felt for generations,” said John Gardner, vice president of University Advancement and CEO of the WSU Foundation. “Raising $1 billion is a significant achievement. It has put WSU into an elite group of higher education institutions, and we’ve only just begun.”

The five largest commitments in WSU history were made during this campaign, including gifts of $26 million and $25 million from Paul G. Allen and the Bill & Melinda Gates Foundation respectively to support international teaching and outreach programs and to fund construction of WSU’s Center for Global Animal Health. Research at the school focuses on discovering new vaccines, diagnostics and other strategies to control global infectious diseases that affect both animals and humans. The school and the center that houses it were both named in Allen’s honor.

The Gene and Linda Voiland School for Chemical Engineering and Bioengineering has become one of the leading programs in the nation, thanks to a $17 million commitment from Gene and Linda Voiland in 2008. Their gift created two Voiland Distinguished Professorship positions within the school and provided critical funding to support innovative research into new energy conversion technology.

The campaign was not just about big gifts. Since the campaign began July 1, 2006, more than 206,250 individual donors and industry partners stepped up to make nearly 820,000 gifts, grants, revocable or other commitments in support of WSU students, faculty, research and outreach, and to leverage the university’s impact across the state and around the world.

Support for students and access to higher education was a top priority of The Campaign for WSU, with more than $338 million raised in current and future gift intentions to support scholarships and graduate fellowships university-wide.

Additionally, nearly $52 million was committed to campus development initiatives through the construction of spaces where students and faculty can learn, discover and compete. Dozens of construction and renovation projects in Pullman and at WSU campuses, extension and research locations across the state were funded at least in part by private support during The Campaign for WSU.

“The size, scope and impact of this campaign is bigger than any one donor or any one gift,” said Carson. “It is about powering the big ideas that transform lives—the lives of our students, the citizens of our state, and the countless beneficiaries of WSU’s remarkable teaching, research and outreach around the globe.”

Vice President Gardner agreed. “We have crossed an important milestone as a community together, and I could not be more proud of everyone who stepped up to this great challenge,” he said. “Cougar Nation has once again proven it has a unique ability to help WSU exceed all expectations now and in the future.”

A WSU community-wide campaign celebration is planned for September 18, 2015 in Pullman, and a final report detailing the success of The Campaign for WSU will be available in the fall.